Simon Owen is the face behind Envisage Design; he’s been a graphic designer for 25 years and fulltime freelance for 23 of those.

His decision to set up his own design studio so early in his career (he was 24) was driven by his belief that computers would become a vital tool within the graphic design industry. Simon seized the opportunity to be one of the first in the country to embrace this new technology and established Envisage in 1994.

He was no stranger to doing things his own way. At Design College, in the pre digital era, Simon’s innovative thinking led him to present his work on film rather than in the clumsy portfolios that were the norm of the day and in his final thesis, back in 1990, he left many of his tutors struggling to grasp his vision of the multi-media world we know today. They did however and Simon was the first student to graduate with distinctions in all assessments in Applied Art and Design at Auckland’s AUT. 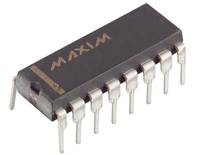 The technological and artistic drive behind this notable achievement started early and was born out of his two main childhood passions; Simon revelled in the complexities of building circuit boards using the likes of Dick Smith’s ‘Build Your Own Electronics’ and it was then that he also first immersed himself in comic book graphics. 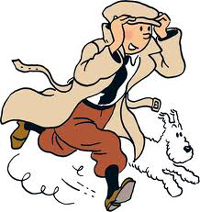 Growing up, Simon’s father was a merchant seaman and as a child he travelled extensively experiencing a wide range of cultures, one of his clearest memories from this period was the wonderful imagery of Herge’s “Tintin”. This passion continued; Judge Dredd and Heavy Metal came along in the late 80’s, in the 90’s he took to collecting cutting-edge graphic novels like Allan Morre’s “Dark Knight” and Martin Edmond’s “White Trash” and as the digital era kicked in, Simon’s attention was drawn towards the video games that embraced the classic comic book look.

His interest in electronics had set the ground for his fascination of computers; this was triggered on his 13th birthday when he was given a Commodore 64. This state of the art machine not only fired his love of electronic gaming but much to his amazement also allowed him to design and build his own games.

The computer opened up a whole new world to him and Simon grasped an early understanding of the immense potential that computers offered and how their software, if manipulated effectively, could be both rewarding and damn good fun. This would stay with him and it set the scene for his adult working life. 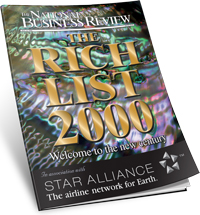 These clients realised that Simon had a unique blend of artistic flare, professionalism and technological know-how. Such was his success that within seven years he was able to purchase an office suite in Auckland’s fashion district High Street.

Once there, his profile went from strength to strength as did his client base; CCH NZ, Lexis Nexus, the Rich List, Brook Asset Management, NZ Property Magazine all came on board.

Then came the internet age that Simon had envisaged at Auckland AUT all those years before, he’d seen it coming and was perfectly placed to be amongst the first wave of website designers, not just in New Zealand but globally. 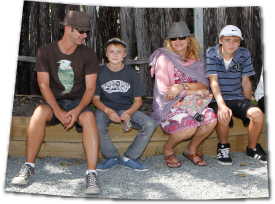 Between 2002 and 2007 as the internet age  boomed so did Envisage Design and Simon’s thirst to keep abreast of emerging technology, such as Flash, WAP and Database Integration, meant his business became a unique, truly multi-discipline studio specialising in – website, print and brand design.

But it wasn’t all work and no play; in 1995 Simon married his business and creative partner Kay McQuire, two years later Flynn arrived and three years after that Ronan came along.

In 2008 Simon took the opportunity to address his life – work balance and he, Kay, the boys and Envisage Design all moved to Nelson.

Simon and Kay regard themselves as very lucky; they live and work in a lovely environment. Tintagel, their 110 year old family home, is a hive of activity that includes a beautiful separate guest apartment for discerning travellers, a wonderful space for the Envisage Design studio and Bindi the retired racing greyhound.

My studio over the years, from 1994 to present day.

Envisage Design, initially based in Ponsonby, was an instant hit.